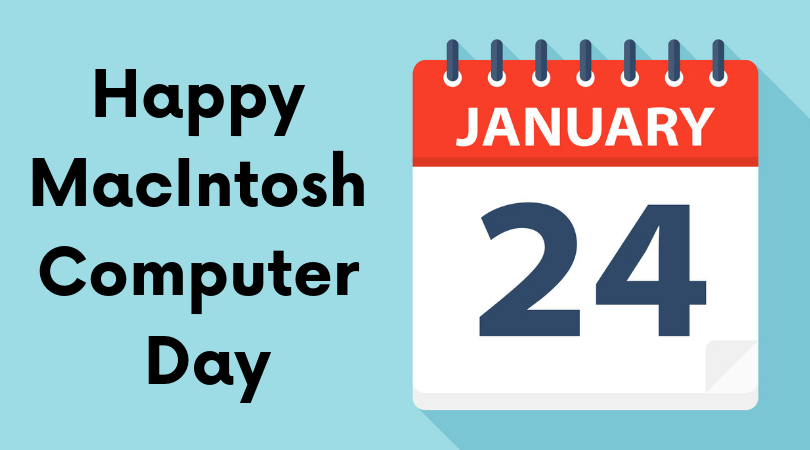 January 24th is Macintosh Computer Day. On this day we celebrate the innovation, skill and can-do spirit that shaped the future of computing. We recognize the history of Apple. Back in 1984, its creators with Steve Jobs at the helm introduced the first Macintosh computer, now known as Apple or Mac to the world would never be the same.

The first Macintosh made an epic entrance during the Superbowl, with an iconic commercial directed by Ridley Scott, of Alien and Bladerunner fame. It depicted a gray dystopian world in which everyone was controlled by the state, a direct homage to George Orwell’s beloved novel 1984.

Macintosh was there to free humanity from the mind control and usher in a new age of freedom and creativity. Looking back it may not seem like much with two programs, MacWrite and MacPaint. But this was the beginning of a company that defined and has continued to redefine not just technology but culture itself.

As with any technology, innovations build on what has come before. But every once in a while we take a great leap forward. In the late ’70s, early ’80s, we’d already been introduced to the Apple II and IBM’s PC, which had begun to shape how we do business.

In the late ’70s, Apple became the fastest growing company in U.S. history, reaching a 300 million valuation (over $1B in today’s money) almost overnight. With over 50 companies trying to get in on the action, one company stood above them, IBM and so began one of the most brutal rivalries in history as many would-be competitors fell by the wayside to be largely forgotten by history.

Upon its release, the Macintosh became the first commercially successful personal computer that included a mouse and a graphical user interface (instead of lines of command), two very unpopular features at the time, because — you know — change is hard.

A Bitter Rivalry: Apple Vs. IBM

In 1983, before the arrival of the Macintosh, IBM stood poised to take over the world of personal computers, making deals with other companies to solidify its stronghold in the industry. And within three short years, IBM had sold over 2 million computers. That’s a great feat in a time when a very basic personal computer cost over $2000 (~$7000 in today’s money).

The 1984 Macintosh release became humanity’s last hope to prevent IBM’s world domination as was reflected in their choice of commercials. Apple spared no expense, spending over $15 million on its Superbowl campaign, which actually ended up raising the price of the Macintosh by an additional $500.

That war would rage on for the next decade as IBM cemented deals with Intel and Microsoft that would shape how people perceived its products. Many 3rd party companies would be forced to choose between IBM and Mac compatibility.

Steve Jobs notably said, “Design is not just what it looks like and feels like. Design is how it works.” This quote exemplifies Macintosh from the beginning. While IBM continued to create systems that were hard for the average person to use or understand, Apple was focused on creating intuitive hardware and software that took virtually no training to use because it just made sense. Did they always live up to this goal? No. But it drove them to continually improve their product.

The Macintosh project had actually been many years in the making. In the late ’70s, Apple employee Jef Raskin looked beyond what had gone before and into the future where computers were easy to use and so affordable that almost everyone could have one. He had initially wanted name the computer after his favorite apple, the McIntosh, but was forced to change the name for copyright reasons. Jef recruited a team of top minds like Bill Atkinson and Burrell Smith.

Smith designed the first Macintosh board that contained an astounding 64 Kb (Yes, Kb!) of RAM and used a Motorola 6809E microprocessor. This monster of a machine could support a 256×256 pixel B&W bitmap display. But through continued ingenuity, Smith persevered until the system could support a 384×256 pixel display. Smith’s design used less RAM than Apple predecessors, making it much more cost efficient.

The final design for 1984 release had a QuickDraw picture language with 64 Kb of ROM and 129 Kb of RAM. The system did not yet have memory slots to expand capacity, but it was designed to incorporate 256 Kb RAM through soldering for those willing to take that on. The monitor was 9 inches of 512×342 monochrome pixels.

At this time, Steve Jobs, co-founder of Apple, shifted his attention to the Macintosh project, foreseeing it becoming their crowning achievement. Raskin, who up until this point, had spearheaded the Macintosh project left the project when Jobs entered because of personality conflicts.

Upon its release, the Macintosh suffered a serious setback in the fact that 3rd party software manufacturers did not want to take on the time and expense to re-write software that had been designed for IBM.

Macintosh continued in an uphill battle to retake market share once taken from them by IBM. But it would be decades with before Apple would again take over the industry with the Advent of iPhones and iMacs in one of the biggest and longest in the making comebacks in the history of any industry.

And for this, we celebrate, January 24th, Macintosh Computer Day.